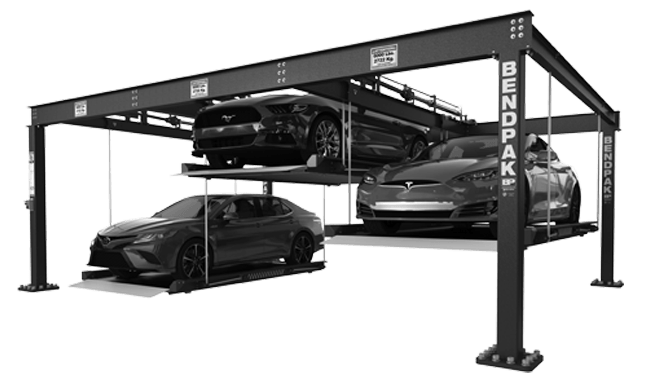 Compared to traditional parking lifts, platform lifts allow more vehicle storage in less space. There are generally no posts in between the platforms, and a lot of sophisticated engineering goes into making the platforms’ lift even, controlled and safe. Since the platforms move independently, only one lower-level vehicle has to be moved in order to access a vehicle on the upper-level. Other double-wide parking lifts require all lower-level vehicles to be moved. This can be time-consuming and tiresome.

As mentioned above, platform lifts are complicated feats of engineering, and unfortunately, those costs do get pushed back to customers. For one, there’s significant off-loading compensation that goes into making the extra-wide four-post structure safe. After all, two or three vehicles—up to 18,000 lbs. of weight, generally—need to be lifted and raised independently. That can mean lots of awkward weight distribution that needs to be accounted for in the design. They’re very safe, but they’re pricier than Autostacker. Two, the posts and overhead structure take up a lot of space; there’s just no getting around it. Platform lifts need to be installed in a wide, high-ceiling garage.

How it compares to Autostacker

The obvious point is that Autostacker parks only two vehicles, one on top of the other. Platform lifts usually hold either four or six. Additionally, the Autostacker parking lift is meant to address the very problem you get with puzzle lifts: it’s post-less, fully collapsible, eliminates off-loading and made to be extremely compact. Autostacker, we believe, is the first truly next-gen parking lift. Its patented inclined ramp and Door-sentry™ cushioning protect low-clearance vehicles and doors better than any parking lift to come before it.