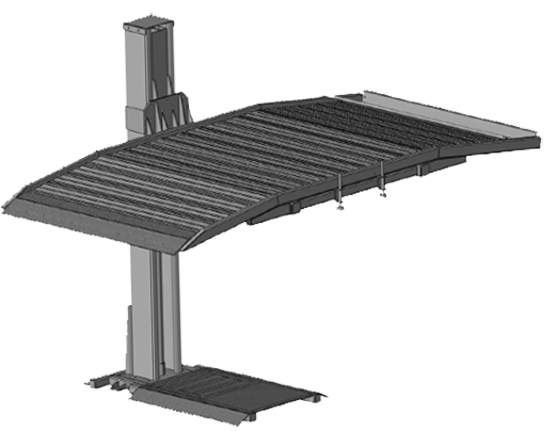 Once upon a time, single-post lifts were considered a great space-saving parking lift alternative. Since they feature only one post they gave the appearance of a space-saving solution. But because of the massive sized column that it takes to support such a heavy load (your car) at the end of a long cantilevered platform, space-saving is thrown out the window. Single-post parking lifts are rarely used for parking purposes anymore, however, and they’re virtually never used commercially. The problem with these lifts comes down to engineering.

As you can imagine, the amount of off-loading compensation necessary on a single-post lift is substantial. All of them have the unique characteristic of having diving-board movement when loaded. While they might seem like a neat idea because they appear to take up less space, having only one post as opposed to two or four, they require complicated engineering to handle the off-loaded weight and they actually take up a lot more space than the Autostacker. A single-post lift will never be rigid enough to give you peace of mind – especially when loaded close to their max capacity.

Beware of the hump

Every one of these strange stackers has a speedbump sized base frame and cover plate spanning the width of the platform. Unfortunately, many find out about this design flaw after the lift is installed. Driving over this 4” to 5” tall is assembly is challenging. Many times the unyielding height interferes with low-riding sports cars.

Autostacker’s hydraulic cylinders push directly against the weight of the vehicle, eliminating off-loading and reducing the complexity of our design. The seamless, collapsible scissor arms are able to raise the platform without tilting it, and the radial shift is mere millimeters - virtually non-existent. This makes a huge difference in tight spaces. Without a massive column, springy platform and virtually no front-to-back shift, Autostacker is truly one-of-a-kind.